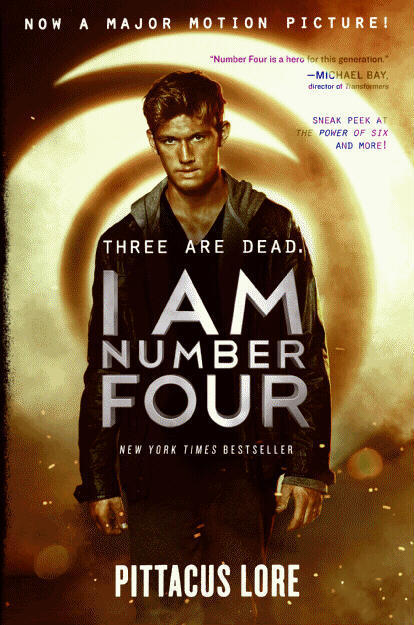 If you’ve followed my blog for much time at all, you know I’m not a big reader of science fiction. There are a few exceptions and one of them is the Lorien Legacies by Pittacus Lore.

This started several years ago when I picked up I am Number Four at the Scholastic Book Fair at the middle school where I worked. It sounded like something to recommend to the boys in my reading class. Of course, how can I recommend something I haven’t read?

That first book was a non-stop thrill ride. Four (aka John Smith) yearned to be a normal guy and didn’t understand the reason for all the moving around and secrecy. Then his legacies started to appear. Talk about freaking a guy out. Do you want your hands to glow in a darkened classroom full of your peers?

In the first book, everything is from Four’s perspective. There is lots of intrigue and romance. Surprises abound. It has some sad moments but they didn’t make me want to throw the book across the room. Too much.

Second in the series, The Power of Six is written mostly from the perspective of an entirely new character. In Europe, Marina (aka Seven) is having a completely different experience that is a shortcut to disaster. Her mentor (Cepan) is pretending the whole Lorien Garde prophecies aren’t real.

We also ride along with Four, Sam and Six as they avoid Mogadorians in the US and try to locate the other members of the Garde. The trio is constantly pursued and has several near misses. Twists and surprises build the suspense, as well as the love triangle developing between the traveling companions.

The Rise of Nine launches with a dangerous mission to a Mogadorian base in West Virginia. There, John rescues Nine but loses Sam. Now the crew in America must unite with the crew from Spain in order to stop the Mogs and save Earth from suffering the same fate as their home planet Lorien

At the end of The Rise of Nine, the combined force of the five Gardes can barely rescue John’s girl from the Mogs. They need to unite the entire team of survivors if there is any hope. This means finding Five and utilizing the legacies of the tenth survivor (Ella), as well.

To me, the title of the fourth installment, The Fall of Five, gave too much away. I read each page hoping I was mistaken, praying Five wasn’t a traitor. The Lorien Garde assembled and trained in Nine’s incredible Chicago penthouse. A few budding romances add conflict, as well as the power struggle between the guys for leadership of the group.

As far as I can tell, John’s girlfriend, a human, is becoming something of a burden. She knows it but they can’t imagine being apart. Last time, the Mogs captured her in an attempt to bait a trap for John.

In the end, one Garde dies and several are captured thanks to the traitorous Five. Sometimes trust does have to be earned. These young aliens may never open their hearts again.

On Wednesday, I’ll give you my review of the latest installment in the series released on August 26, 2014.